Providing air for the treatment process

This is done in one of three ways: 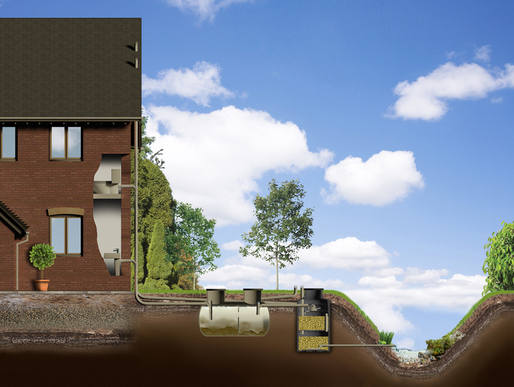 The PRIMARY TANKS are included when you order the FilterPod sewage treatment system package. These are also vented to a separate soil vent pipe (it is often possible to use the existing SVP - see the drawing) and therefore no smell is emitted from the tank.

Note, there is one vent pipe from the FilterPod and another one from the settlement tank. You cannot vent both through one 'chimney'.

The final effluent can be discharged either to a soakaway or a watercourse.

Click below for a video of how the FilterPod works:

Never let anyone who is untrained on the FilterPod system undertake any maintenance on your plant. Unless the FilterPod is serviced by qualified FilterPod service engineers, your warranty will be voided. We have seen many extremely stupid things done to the system by so-called 'service engineers' and 'drain experts' and these are likely to result in having to replace the entire RDX media.

The tanks themselves have been designed for UK site conditions. There is an installation manual that covers standard dry and standard wet ground conditions.

You also need a slightly sloping site as the outlet from the FilterPod is 1800mm below ground.