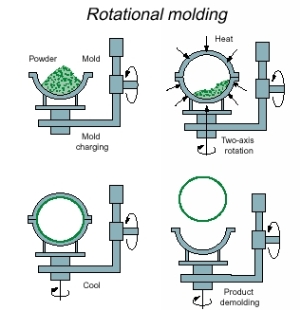 placed into an industrial oven. The mould is turned through all directions so as the plastic melts it assumes the shape of the steel mould.  When the plastic cools, the mould is removed and you have a plastic tank.

Rotational moulding is an excellent method of producing strong tanks in a cost effective manner however you must very wary when buying a rotationally moulded tank.

Rotationally moulded tanks can be very weak and totally unfit for their intended purpose.

There are many factors that influence the strength and quality of rotationally moulded tanks and they are as follows:

A Sewage treatment plant is only as good as the tank it is in. If the tank fails, the entire system fails.

The Design of the Tank

The design of the tank is vital in ensuring that it will be strong enough for its intended application. A tank can be made from adequate materials but if the design is wrong the tank will bend and fail.

There are two common features that often result in tank failure:

A circle is the strongest shape because wherever pressure is applied the rest of the circle will oppose this force.  This is called hoop strength.  A tank that is square or rectangular in profile is much weaker due to a lack of hoop strength; the flat sides can deform because the shape of the tank does not oppose the external force.

One of the flaws in many tanks is a flat base.  The base of the tank is the most vulnerable part because it is the deepest and therefore exposed to the greatest pressures.  A simple flat base is a very weak feature compared to a convex base.

The FilterPod tank has a flat base in profile.  To strengthen the base of the tank we have incorporated kiss-off features.  A kiss-off forms a bond between two layers making both layers stronger than the sum of their parts.

Even given the kiss-off features, the FilterPod tank it is not strong enough for all ground conditions so the design also features ducts into which steel reinforcement bars can be inserted. Even given all modern materials and design techniques the only way to give the flat base sufficient strength was to use steel and we are not aware of any other tank manufacturer who has done this.

A ribbed tank wall is much stronger than a straight smooth wail.  Many tanks are smooth or only have shallow ribs and this greatly reduces the inherent strength of the tank in the same way that corrugated cardboard is stronger than normal cardboard.

The majority of rotationally moulded tanks are not designed to with stand 100% hydrostatic head – where the water table is at ground level.  This is essential because many sites can become waterlogged at some times of the year and freak extended rainfall periods will always occur.  Manufactures will often stipulate that the tank cannot be installed on a site where the water table or ground water rises above a certain point on the tank, such as the outlet pipe.  These tanks are not designed to withstand 100% hydrostatic pressure and you have no control over rainfall, snow, the water table or ground water.

Because it is impossible to create a waterproof surround for an underground tank the tank itself must be inherently strong enough to withstand the enormous pressures it may be subjected to.  Please see http://www.podtanks.com/concrete_installation_myth.html .

The Type and Grade of Plastic

Rotationally moulded tanks are nearly always made from polyethylene (PE) and it can be divided into three categories:

Underground tanks should only ever be made from HDPE.

Because of the lack of regulation there are no parameters as to what constitutes LDPE, MDPE or HDPE.

This lack of regulation is terrible for the consumer because it is impossible to compare tanks unless you know exactly which material tanks are made from and have a technical knowledge of these materials.

A manufacture should always be able to tell you exactly what plastic the tank is made from in terms of the manufacture, the product range and specific powder (i.e. – ICO Polymers, Icorene, 1339).  Simply calling it HDPE is not sufficient.

Manufacturers may refer to virgin and regrind materials.

As the name suggests virgin material is brand new powder.  Regrind is made from the offcuts and waste of previous tanks.  Although regrind is chemically the same as the virgin powder it is inferior because of how the material may have been processed (see below).

Some manufacturers employ a technique known as blending where they will mix different plastic powders together to make a tank.  This should never be done for underground tanks because the resulting plastic has no verifiable or tested qualities. It is almost impossible to mix different powders together uniformly and variations in wall composition results in weak spots.

Blending is only ever done to save costs.

The Skill and Professionalism of the Moulder

The skill and professionalism of the mould is paramount. A bad moulder can be given the same mould and powder and produce a totally unsuitable tank.

The rotational moulding process is dependent on many different aspects:

The above points will affect how the plastic melts, flows and sets.  It is essential that each aspect is done correctly so that plastic does not “burn”, degrade and is a uniform thickness throughout the tank.

A tank with incorrectly processed plastic is useless.

There are things that a consumer can check when looking to buy a rotationally moulded tank:

The above are general rules but please bear the following in mind: